Is your Bank Confused Between ‘to go for’ or ‘not to go for’ Automation?

Home » Blog » Is your Bank Confused Between ‘to go for’ or ‘not to go for’ Automation?

Is your Bank Confused Between ‘to go for’ or ‘not to go for’ Automation? 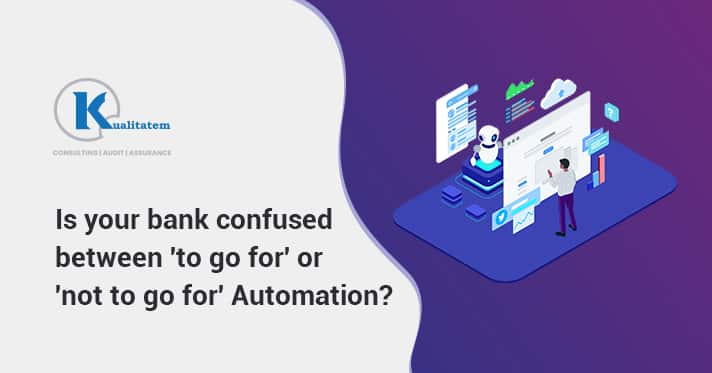 The number of cybercriminals and the intensity of threats is increasing day by day. You can find lots of cyber threats present on the internet and while you prepare to face them with proper tools and solutions, even more, advanced threats are already present to harm you and your clients. Where the advent of artificial intelligence and machine learning has been a good step towards the success and a brighter future, these strong tools in the hands of cybercriminals means even stronger cyberattacks. When it comes to the banking industry, it is always one of the top few names on the target list. Also, with the trend of mobile applications, the need to get safer and securer than ever is real. That is why you see a bank always attached to a banking app testing company.

However, the majority of the banking mobile application testing companies are confused about whether to keep using the same old manual testing ways or go for the newer version of testing called automated testing. What do you think about this matter? Do you hold an opinion or are you stuck at this point trying to make a decision too? Well, if you are finding it hard to decide, we have gathered a few facts from today’s world to help you out.

How to Beat AI and ML?

As we have discussed before too, artificial intelligence and machine learning are two of the strongest tools the world of technology has ever seen. In the hands of the wrong people, these two technologies can bring havoc and cause a lot of businesses to fall to their knees. While a lot of people would love to believe that this is something still far away from us, it is very much real and present in our world right now. Cybercriminals have designed attacks and ways to get into your system with the help of artificial intelligence and machine learning. The old and classic testing called manual testing has failed to find all of the hidden vulnerabilities that can exploit your system without you even knowing. It is only through AI and ML empowered testing called automated testing that you can find all these loopholes and fix them to keep your bank and your clients safe.

Whether we talk about the banking field or any other industry, the needs and wants of the customers are changing at a much faster pace than before. Customers are now asking developers to add more features and functionality almost every second month. You must understand that whether you decide to add one new feature or multiple new features, the process followed is the same and takes almost the same amount of time. At such a faster pace of asking new features, the developers are left with less or no time for testing and ensuring the application is all safe for the bank and its customers. So to keep up with such a demanding user base, a lot of banks prefer to opt for a banking app testing company that uses automation testing as it takes less time and checks the application from all possible angles to make sure no vulnerability is left behind for the cybercriminals to make use of later.

Perfect Use Cases and Test Cases

Making the perfect use cases is the first most important step of the testing phase for a mobile application or software. It demands the testing team understand the application in full depth and make all possible scenarios to test them later. Once the use cases are written, it is time for the team to move on to making test cases against all the defined and passed use cases. These test cases are similar to real-life scenarios the application will face once launched. These test cases involve some inputs and predictions about the outputs as well. Automation testing is found to do a lot better than manual testing when it comes to making use cases and test cases. Why is that so? The reason behind it is the underlying machine learning and artificial intelligence algorithms that give the testing application power to combine its experiences and the changing market trends to test the application from every angle. It is usually hard to find any vulnerabilities in the applications tested by automation testing software.

Manual Testing is still at the Top

Well, you must be convinced by now that automation testing is the best for your banking mobile application. Are you not? We would love to surprise you here with an astonishing research fact, which says that a lot of mobile application testing companies love to have automation testing involved in almost every testing project they receive but still they end up opting for manual testing 75% of the times. Why is that so? It is because manual testing does not require a lot of initial investment. You can hire a bunch of testers, form a team for them, and ask them to start working. You will be paying their salaries, the cost of the office, and maybe for some testing tools as well. However, in automation testing, you will have to pay for the whole automation testing software that does not come at a low cost. It is true that it offers a good return on investment but that is not a good deal for every testing company. Moreover, a lot of automation testing software is complex and it takes a tester a month or so to learn to use it efficiently, which is not ideal for most of the testing companies.

In the end, we would like to say that you are well aware of the reasons you should opt for automation testing and the reasons you should stick to manual testing. Now, it is on you to keep both of these benefits side by side and decide what should be the next step of your banking app testing company? Are you going to go with automation testing or will you stick with manual testing for some more years to come?

Noor has been reading since childhood, from prose to blogs, literature to technical, he has loved the always loved to have a good read. Changing what was his passion into something he does for fun he started writing. With over 9 years of experience, he has been studying IT with great fervor

The Importance Of Maturity Assessment In DevOps

How To Align Your Automation Testing Strategy With Manual Testing?

Production Data vs. Synthetic Data: Which one to prefer for Software Testing?

Coding Critiques: What Matters the Most in Code Reviews?